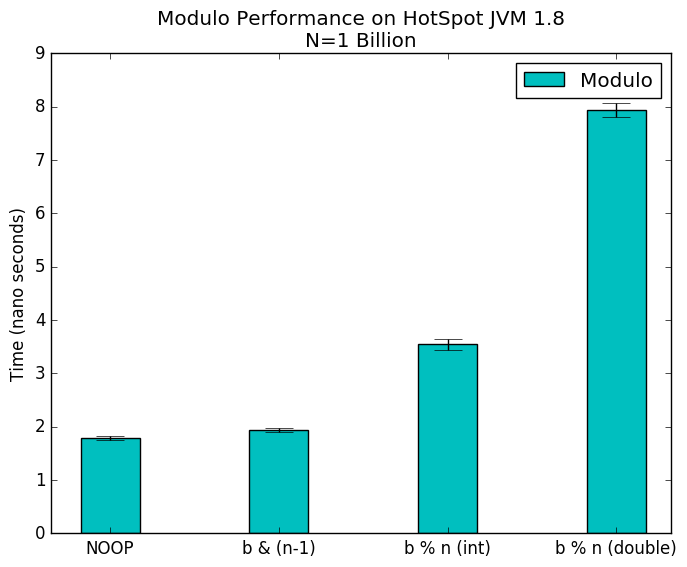 I was surprised when someone told me not to use the modulo operator in high performance code. My textbooks used modulo (%) and various high performance implementations say to use modulo. Where had I gone wrong?

If you look at the JDK’s mod() implementation, you’ll see that it’s indeed O(n) for IEE754 floats, and O(1) for doubles. Note, the Java Spec defines modulo for integers and also for negative floating point numbers.

Luckily, there are tricks for modulo with integers.

Here’s the trick; don’t use floats. Floats are a pain for numerous reason, but let’s assume you’re wise enough to use a primitive integer type (int or long) to feed you mod() code, such as your hashmap implementation. There are many neat bit twiddling tricks to quickly conjure mod(int,int).

Computers are binary by nature, so using powers of two provide lots of tricks. These can compute mod(int, somePowerOf2) in only a single machine instruction! Here’s how.

For example, if I want to do 61 % 8, to know which of an Array[Byte] to grab a value from, we can think of it in binary as logical conjunction of the dividend with the mask of all bits lower than the divisor. For powers of 2, that’s just n-1. The bit operations are illustrated below, using 32 bit integers.

We can code this simply as:

Comparing the byte code of classic modulo, and our faster version, we see they are both 4 lines of byte code. However, classic % calls the byte code operation irem which itself calls a native routine, so it’s far more complicated and won’t run in constant time.

A simple benchmark1 on bare metal2 shows what we expect, doing one billion passes of each.

If modulo is a critical path in your code, and your divisor is a power of 2 (with Natural dividends), use this trick. Otherwise, the stock JVM implementation should serve you well.